“A story of growth, bankruptcy, more growth to a new building and a team ready for the future”

Experts in accumulation and conveying technology

Polyketting: the story
After a warm welcome, Ton de Groot, director of Polyketting, started immediately. After the bankruptcy in 2011, Polyketting had (and wanted!) To modernize. Where they started with conventional lathes, the urge for CNC machines grew. In addition, more small series are now being produced at Polyketting. After contacting STYLE and with several employees visiting the STYLE factory, the switch was made to CNC. STYLE turned out to be a perfect fit: a purely Dutch company and technically good machines. The new 510 lathe has been working overtime since the end of March. “But”, says Ton, “first go back to the beginning.”

Polyketting was founded in The Hague in 1956 by Mr Van Koeveringe. Here the trade in chains and gears was central. Over the years, this has been expanded to include conveyor chains, partly due to growing customer demands. Due to a lack of space in the Randstad and high rents, the management decided in 1975 to move to Zelhem, in the Achterhoek. This space offered Polyketting the opportunity to innovate and the production of complete conveyor belts was started. Not long after, they opened their own production facility and software engineering. In 1990 it now employed more than 80 people and it was a thriving company.

In 2006 the company including all employees was taken over by Mr. Odink and Mr. Grasmeijer, both with a lot of experience in the transport systems industry. In addition, the name Polyketting continued to exist, as did the autonomous position in the market.

Crisis as a new starting point
During the crisis, Polyketting got into trouble; the company went bankrupt in 2011. At the time, it employed 40 employees. Fortunately, there were enough people with confidence in the company. Former financial director Ton, now the general manager, saw opportunities to distinguish himself with new, improved products. He decided to take over the company in December 2011. With 15 people, they worked very hard on the restart and the company slowly emerged from the recession. After the restart, Polyketting developed an advanced accumulator that scores well nationally and internationally. “Polyketting is back in business.” laughs Ton.

The focus is on the three main activities: development and manufacturing of computer-controlled transport systems, trade in conveyor chains and the manufacture of conveyor belts. The clients are mainly large industrial companies from the Netherlands and abroad, but the largest group consists of the food industry. “Think of companies such as Tetrapak and Elopak,” explains Ton.

Flexibility from engineering to production
“And, our biggest customer is just with us in the building. Intralox in Zelhem makes, among other things, mats for transporting shrimp, but also large sorting systems for companies such as Zalando or Amazon. ” It is a real rear-end company: the raw parts come in and the complete product comes out and is immediately ready for transport to the customer.

Now in 2017, 60 people are now working at Polyketting and the move to about 500 meters away has been in full swing for over two years. “In March 2016, the roll maker moved to the new building and gradually the rest of the production is also being relocated. For example, the second laser will be moved this year, ”says Ton. “And last March we bought another new piece of land because the growth is going unbelievably fast”.

After this wonderful story, Ton takes us through the current building to the new building. We were proud to be given a tour, from the office to the large production hall where work is still going on between the companies for the departments that are still at the ‘old’ address. Then we walk on to the place where the STYLE machines are set up. Here we meet the turners Niels and Gertie. Niels explains: “I had some CNC experience, but after half a day of training on the STYLE lathe, I was able to get started myself. I am very satisfied with the machine, it works quickly and very accurately. ” Gertie shows that even the design of STYLE can still be changed: “We have placed extra metal plates at the back, which prevents damage to the sheet metal. This keeps the machine as new ”, Gertie explains.

“The advantage of STYLE is in the contact with only one organization and having one type of machine. This makes us a lot more flexible. These four machines have also helped us modernize the machine park. The production process now runs very smoothly ”, Ton explains enthusiastically about the neatly placed machines. 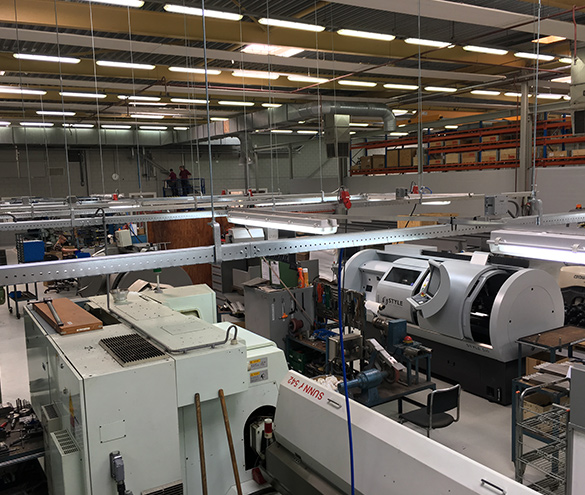 Innovation: multi-track buffer table
Polyketting does not sit still and is busy with innovation on a daily basis. Processes must run more efficiently, costs must be kept low and the customer wants quality, effectiveness and simplicity.

An accumulator or buffer table has been presented for three years now. (June 2017, ed.) This is a conveyor belt that can absorb short congestion itself. This can reduce the number of line interruptions by about 5 to 10 percent. Polyketting supplies a complete buffer and transport system that they design, manufacture and install themselves. Over the past three years, Polyketting has further developed a new generation of buffer tables under its own management, for which there is great international interest and for which patents have been granted. These types of systems are mainly used in the food industry, dairy industry and the non-food industry. A beautiful product of which the STYLE machines can provide a small part.

We would like to thank Ton de Groot for opening up his wonderful company and we wish Polyketting every success for the future.